In this post I want to look at how the poem composed by Jura Soyfer whilst he was in Dachau Concentration Camp in 1938, the ‘Dachaulied’, became known in the UK. As discussed in a previous post, the song was an ironic response to the Dachau Camp slogan: ‘Arbeit Macht Frei’ (‘Work Makes you Free’).

This song is of particular interest to me as an archivist because its origins highlight the fact that not all of Soyfer’s lyrics and writing reached the outside world as written texts. In Dachau the poem could not actually be written down, of course, so knowledge of the lyrics had to be passed on orally. Once it had been set to music by the composer Herbert Zipper, who was in Dachau with Soyfer, and the song was recited to a small circle of Soyfer’s comrades, who memorised them and sang them in secret.1

A written record of the song was made only after Zipper had been released from Dachau and was safely in exile in Paris in March 1939. From Paris the song was brought by another Dachau inmate to the UK, where it circulated among the Austrian exile community. The image above shows what may be one of the first written records of the song. It is a rather tatty leaf manuscript, without a title or author and with a number of corrections and discrepancies with the (later?) published version. Possibly it was even written down from memory by someone who had been in Dachau with Soyfer.

In London, the exiles did their best to promote the poem to the outside world. The youth exile group, Young Austria, were the first to publish the poem – it appeared in their journal Young Austria in November 1939.2 In 1940 it was published by so-called ‘enemy alien’ prisoners in Mooragh Internment Camp in Ramsey on the Isle of Man in their publication, Stimmen hinter Stacheldraht (Voices behind barbed wire). In the copy of the publication in the Exile Collection of the Germanic Studies Library archives shown above, the addendum below the poem translates as follows:

Above the entrance to Dachau Concentration Camp stands the slogan ‘Arbeit macht frei’. The ‘Dachau Song’ by Jura Soyfer, a Viennese poet who died aged 27 in Buchenwald in February 1939, is reproduced here inexactly from the memory of one of the former inmates of Dachau.

In 1942 the poem was also was published by the Austrian Centre again as one of the five Soyfer poems in the anthology Zwischen Gestern und Morgen, mentioned in a previous blog. 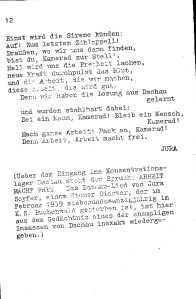 In the same year the ‘Dachaulied’ was then brought to the attention of officials in the Ministry of Information, probably by the Hungarian exile, Arthur Koestler, who had been employed to write propaganda film scripts for the Ministry. He incorporated the ‘Dachaulied’ into the film, Lift your Head, Comrade, which told the story of German and Austrian anti-fascist volunteers who had joined the British Army Pioneer Corps.3

Listen to this song. It is sung to this very day by the prisoners in the concentration camp at Dachau. It was written by a young Austrian poet in the camp, whom the SS men eventually killed. ‘Pitiless the barbed wired. All around is charged with death. Keep your step, comrade. Lift you head, comrade. And always think to the day, comrade, when the bells of freedom will ring.’

In the film the song has taken on the role of a battle song – exactly as Soyfer had intended. The film is available to view on the Imperial War Museum’s website here. 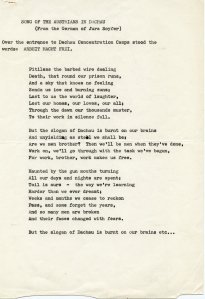 After the war the ‘Dachaulied’ became still better known to English speakers through the translations of John Lehmann. The above image is a typescript of Lehmann’s translation of the ‘Dachaulied’ in the Miller Archive, which he published in 1946 under the title ‘Song of the Austrians in Dachau’ in Poems from New Writing under the pseudonym Georg Anders. Lehmann was a great friend and admirer of Soyfer, writing in 1939 that Yura[sic] Soyfer, who ‘died in a Nazi concentration camp early this year’ was ‘a talented young Austrian writer, a Schutzbündler, who  […] was one of the favourite writers of the little Viennese cabarets’.4 Lehmann was in fact responsible for publishing the only part of Soyfer’s novel to be published while Soyfer was still alive (in the first volume of his New Writing series in 1936). As the postcard below shows, he continued to promote Soyfer’s work over several decades, publishing more of Soyfer’s work in 1963.

Footnotes
1 Horst Jarka, Jura Soyfer: Leben, Werk, Zeit, (Vienna: Löcker Verlag, 1987), pp. 475-480.
2 Jennifer Taylor, ‘The Press of the Austrian Centre’ Out of Austria: the Austrian Centre in London in World War II, ed. by Marietta Bearman and others (London: Tauris Academic Studies, 2008), pp. 59-85 (p. 77).
3 Matthew Lee, ‘The Ministry of Information and anti-fascist short films of the Second World War’, in Holocaust and the moving image: representations in film and television since 1933 (Great Britain: Wallflower Press, 2005), pp. 107-108.
4  John Lehmann, ‘About the contributors’, in New Writing, ed. by John Lehman (London: Hogarth Press, 1940), pp. 8-10 (p. 10). A Schutzbündler was a member of the paramilitary wing of the Austrian Social Democratic Party, the Republikanischer Schutzbund, which fought against the establishment of the authoritarian corporate state by Engelbert Dollfuss in 1933-34.

By norbertmiller2012 in Jura Soyfer on 28/03/2014.
← Soyfer’s ‘Songs of the Vagabond’ at the University of London White House to become Brown House: the April Fool Führer →